If two or more similar pie charts are displayed, you can make comparisons

This chart shows the relative size of populations of countries of the European Union in both 2013 and 2021. In this case we can make two sets of comparisons:

In this case, we'll look at comparisons between the two years.

The first thing to notice is that there is very little change: all changes amount to less than 1%.

The percentage population of the total other countries of the European Union fell slightly in this period (although individually some of them may risen or fall; we don't know because we don't have the data).

Germany remained the largest population of the European Union. 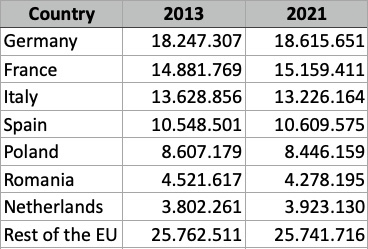